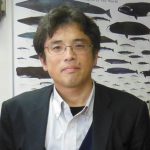 Dr. Fujino Takeshi has been an associate professor at Department of Environmental Science and Technology, Saitama University, Japan. As his academic background is both from Civil & Environmental Engineering and biological Science, he has an extent knowledge of engineering and biological sciences and he has more than 17 years of academic experience in Aquatic studies (1996-present). The present research interests are Urban Climatology & Countermeasure for Climate Change, Water Quality Monitoring & Purification Technology, and Stream Ecosystem.

Oversea research on River Ecosystem Assessment of Ayeyarwaddy River (2012-2014) and upstream Thailand (2009-2011) are his proven records of great contribution to river ecosystem management in Sustainable Development of Southeast Asian countries. Regarding with the academic contribution to international scientific communities, he reported 13 numbers of research publications who are internationally recognized and mainly focusing on insight of Aquatic Nature; at the meantime, he does not fail to show his academic strength in Urban Climatology and environmental engineering and publicize his research works with 4 international publications. Dr. Monthip Sriratana Tabucanon is currently the Senior Advisor, Commission on Land, Natural Resources and Environment, Thailand.  She previously held key positions at the Ministry as Deputy Permanent Secretary, Director General of the Department of Environmental Quality Promotion, and Director General of the Pollution Control Department, among others.  She was a leader of several environmental cooperation and capacity building projects in Thailand including her contribution in establishing Regional Center of Expertise – Education for Sustainable Development (RCE-ESD) at the Sirindhorn International Environmental Park, The United Nations University (UNU), and in the field of Gender, Integrated Research and Environmental Dispute Resolution, and in the establishments of the Environmental Research and Training Center which was a Thailand-Japan bilateral project, and of the Asia-Europe Environmental Technology Center which was an Asia-Europe multilateral project.

She serves on the Boards of several international organizations including the following - Stockholm Environment Institute (SEI), Sweden ; Institute for Global Environmental Strategies (IGES), Japan; United Nations Centre for Regional Development (UNCRD), Japan ; United Nations University (UNU) Institute of Water, Environment and Health, Canada ; and former Regional Councilor for South and East Asia of the World Conservation Union (IUCN).She has received international awards including the most recent 2009 Asian Environmental Compliance and Enforcement Award.  She has received a Royal Decoration – the First Class of the Royal Order of the Polar Star from King Carl Gustaf (XVI) of Sweden.  She obtained her doctorate in Urban Engineering from The University of Tokyo.